The Notre Dame Cathedral in Paris caught fire and was barely saved from total destruction. Millions of people visit every year and hundreds of millions feel a powerful, and personal, sense of connection to it.

Seeing the cathedral burn was a tragedy, and the bad guys were faster than ever to leverage it into misinformation and social engineering.

One Twitter account stated that the fire was the work of terrorists, and another misrepresenting itself as Fox News posted a fake quote from a Muslim congresswoman allegedly saying “they reap what they sow.” (She said no such thing.) CNN Politics was also spoofed, here is an example screenshot that buzzfeed exposed as a fake. 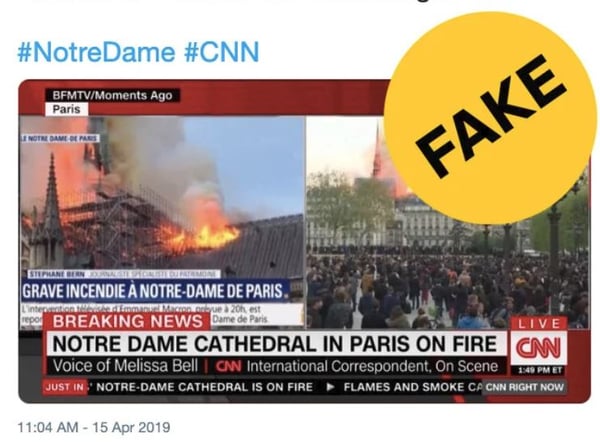 Similar events of misinformation happened at YouTube and other social media. It is extremely easy to create malicious ad campaigns that drive people to credential phish sites or plain infection of their workstation with malware.

Don’t fall for any scams, and do not click on any links in emails, texts or social media. Whatever you see in the coming weeks about Notre Dame… THINK BEFORE YOU CLICK.